Neal Stephenson on the Intersection Between Tech and Speculative Fiction 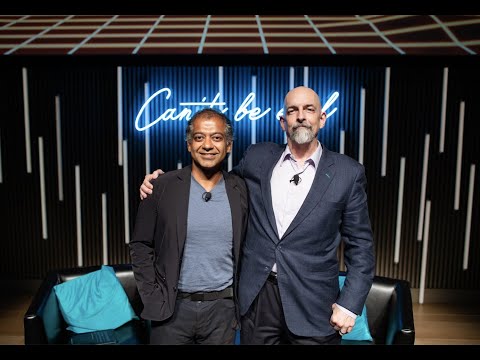 At Blockstack’s 4th Annual Summit in October, entrepreneur and angel investor Naval Ravikant sat down for a fireside chat with one of his heroes, speculative fiction writer and tech consultant Neal Stephenson. The two touched discussed Stephenson’s new novel, Fall; or, Dodge in Hell, in which the internet takes a dark turn, and how it relates to current and future technologies. Here are some highlights from the interview.

The Internet = the Miasma

In Fall, one character refers to the internet as “the Miasma.” It’s a “swamp” of bad data and wrong information put there either by people who are honestly wrong… or by people who are deliberately trying to steer the world’s dialogue for their own purposes.

The Miasma is always attacking you with streams of information: “People have to set up filters to keep the noise out, and they have to have editors to determine what gets in. But that editing actually creates its own version of reality, and so everyone’s living in a different reality based on with edit stream they’re subscribing to, and what they’re pushing out,” explained Ravikant.

There’s a line in the book that speaks to the Miasma’s demands: It “behaves sometimes as if it expected every man, woman, and child on earth to have a social media and PR staff on 24-hour call.” This mirrors today’s climate, where if you publish a Tweet or Facebook post, you have to be on call to monitor how it’s received. As Stephenson said in the talk, it can make you think: “Do I have to cancel what I was going to do for the rest of the day because I need to deal with the aftermath of this thing?”

Stephenson said his “autonomous proxy” bots in Fall are rooted in a concept created by the Bay Area cypherpunks a couple decades ago. “Eric Hughes was talking about the idea of slander service – you could hire somebody to just spam the internet with negative information about you, so that any true negative information that happened to come out would be discounted, and nobody would believe it.”

In the nineties, Matt Blaze proposed an Encyclopedia Disinformatica, which would contain plausible-sounding – but deliberately false – information as a way of making the point that you can’t believe everything you see on the internet.

So according to Stephenson, these internet-filtering ideas have existed in the crypto-adjacent worlds for many years, but didn’t get adopted. “Instead, we ended up with that version of the internet in which people still take everything at face value,” he said. “And even now, after everything we’ve seen in the last few years, I see it all over the place. People, even super-sophisticated people who are very discerning, will see a tweet or a meme that just happens to line up with what they want to believe, and they’ll just fall for it hook, line, and sinker.”

By subscribing to content that lines up with our own beliefs, we’re creating our own individual realities. But unfortunately, Stephenson thinks this mistake is just human nature. “You see somebody out there who’s saying something that confirms what you believe, what you wish were true, and your filters just fall away. You lose your ability to filter this stuff out.”

Are We Nearing a Failed State?

The idea of choosing our own realities and how they can divide nations is also echoed in the book. Stephenson writes about a United States split in half: the blue states on the coasts and a chaotic, disinformation-rife “Ameristan” in the center. “The point there is just that it’s easy to look at war-torn parts of the world that are just a mess, and to think that those places are just different somehow…that they went down the wrong path, or they never found the right path,” said Stephenson. “But I think we’re always one or two generations away from being a failed state, and maybe that time is getting closer. So the Ameristan thing is a half-serious way of trying to make the point that geography is not going to save us. The fact that we had a functioning democracy, or a somewhat better functioning democracy in past decades isn’t going to save us at all, because we have to reinvent a stable democracy with every generation. We’re not doing that right now.”

When Ravikant asked Stephenson about his writing process, he was surprised by the writer’s answer. It turns out the author’s goal is to write five pages per day…by hand. “Whoa! That’s something worth going into,” responded Ravikant.

“I could do more,” Stephenson explained. “But even if you write a single page a day, that’s 365 pages a year, so it’s really more about a steady routine than it is about being incredibly prolific on one day. So I tend to get up, get to work as soon as I can, and get those few pages out.”

But the work doesn’t quite end there. “There’s a thing that I call ‘dieseling.’ It used to be with old cars that after you turned off the engine, it would keep running even though it was switched off because it was operating as a Diesel motor – you literally couldn’t make it stop. And so, I do that creatively after I stop for about 15 minutes, half an hour. These lines will come to me, or sentences. So I just speak them into my, I used to carry a little tape recorder, and now I just use the voice memo thing on my phone, and a lot of times, that’s the good stuff.”

Shannon drives event and marketing programs focusing on Blockstack's growth and expansion. Prior to joining Blockstack in 2017, Shannon spent over 11 years honing her skills as event and program producer, talent manager and brand strategist at Condé Nast and Time Inc.

Introducing the Winners of HackStacks

With the launch of Stacks 2.0 approaching, we can expect a surge of network activity in the form of Stacks miners and stackers. Thanks to Stacks 2.0’s novel consensus mechanism, Proof of...

#HackDefi: Taking Defi to the next level with Bitcoin

As of the beginning of August, there was over $4 billion locked in DeFi markets. Today, just about one month later, that number is over $10 billion. As new projects launch seemingly...

Redefine Summit: Rewriting the Rules of Defi on October 16th

We’re pleased to announce we’re once again collaborating (#FuturePROOF) with Dystopia Labs to co-host the Redefine Summit as part of the larger Liquidity2020 DeFi Summit. We've also partnered on the event with...

Introducing the Winners of Clarity Hack

Another hackathon, another round of mind-blowing smart contract submissions from diehard Stacks community developers. Clarity Hack wrapped up this Monday, and our judges have had an absolute blast this week scoring the...